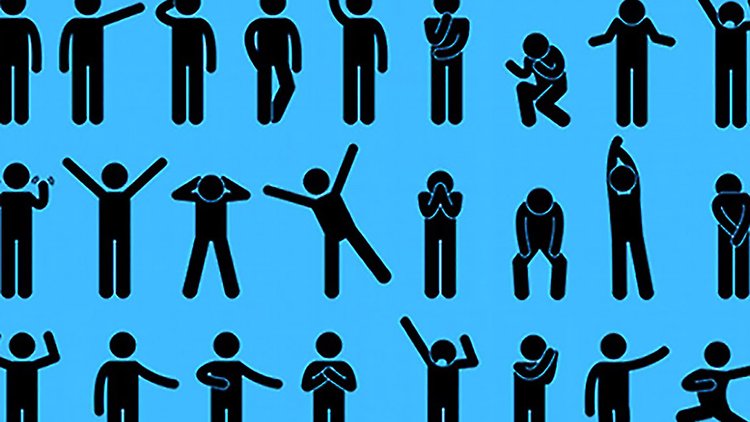 What is body language? Is it the apparent smile on her face when you greet her during the day or is it the furrowed brow of the upset boss as you knowingly walk in late to work. Body language is the non-verbal communication that happens every day during the multiple interactions we have with friends, family, co-workers, husbands, wives, or even the random passerby. Nonverbal communication occurs in many complex ways and in the most subtle of instances. In some cases, even microseconds. Before we go down the long path of microexpressions, let’s talk about more simple non-verbal communication that we do every day that goes unnoticed.

Each of the body language signals we talk about today can be best summed up as either “friend” signals or “foe” signals. As with our natural instincts in life, when we are scared or fearful, our flight or fight response is activated. This will be seen in the “foe” signals. When this response is shown, the person is most likely not engaged, unenthused, or is looking for the quickest way to exit the conversation. On the other hand, the “friend” signal will show just the opposite. This non-verbal action will signify engagement, listening, and, often times, is one of the critical signs of building rapport with someone.  If some of these body language signs have flown under your radar, I bet, after today, you’ll be a little keener to these actions.

Have you ever noticed someone nodding their head while listening to you talk? Have you ever heard someone verbally say ” yeah” in agreement with you while speaking to them? Have YOU done this? Was this a deliberate action that you had to think about doing? Most of these actions, if not all, are our natural reactions while communicating with people. These are the subtle signs that let people know, Keep talking, I’m listening. Much like these verbal and nonverbal signs, the head tilt shows a friend signal. When communicating with someone and you notice their head in the tilted position, it means their listening to what you’re saying. They’re trying to deeply understand the conversation. This is a prime example of the “Friend” signal. Keep it up, you’re doing good.

Body positions can be the best nonverbal cues. It can tell us a lot about our feelings to one another. Unless you’ve had training in the art of body language manipulation, you’re likely to let your body be on auto-pilot. This means our body will subtly project our emotions or how we feel at the time, and if we’re not cognizant enough, these signs may go unnoticed by the untrained eye.

What does the photo above say to you? What nonverbal communication do you notice?

They’re both in closed positions. Closes positions can be a sign of nervousness or guardedness. Her legs are crossed and pointed opposite of him insinuating possible disinterest. What about him?  His arms are cross, his legs are crossed towards her but his body position is facing away from her. Both seem to be playing defense. Next time you’re out, look for these signs. See if you can see the clues.

The lower the body part is to our brain the less mental focus we have to control it. Therefore, the feet can be the most honest body part when it comes to nonverbal cues. Looking at these photos, the left picture shows that the three people all have their feet point inward to one another. Nonverbally, this seems to be a “closed” conversation. Imagine walking up to this group on the left with their bodies making a box, or a shield if you will. The group is not inviting. Now the three on the right, their feet leave an opening, this can be understood as an invitation for others to join the conversation. This could also be viewed as their conversation is open to others to hear as opposed to the group on the left, their discussion, based on their feet position, could be seen as private. Next time you’re talking to someone in a one on one conversation, look at their feet. Are they pointed directly at you? Is one foot pointed the other way? Are both feet pointed away from you? Although the waist and above may be facing you, look at the feet, they can tell you whether this person is attentive to the conversation or trying to leave.

There’s nothing like a gentle warm hug from someone you love. As humans, we all crave affection, bonding, or have a yearning for physical interaction. So it would seem obvious that touching would be on this list right? For many, we either miss the subtle clues of touching or we become confused by this interaction. When does touching become just friendly? When does touching become sexual?

Have you ever hugged someone, you didn’t want to touch? How did it feel? Was it a tight hug? Were you pulling back? People who are aware of such interactions probably noticed what happened. Now, let’s think. Have you ever had someone you wanted to get to know? Someone who caught your interest. At some point, I bet you eventually reached out to touch them. Weather on the shoulder, the hand, or maybe even a hug. Touching has always been the excellent rapport builder. In some countries, touching, such as hugs, are a vital component of social interaction. There are many ways we can build rapport, even on a handshake. You can reach in for a handshake and touch the back of the hand with your opposite hand, or reach in to touch the shoulder as the picture above. These are all forms of touching that is meant to draw us closer to each other. They make us feel more relaxed around each other. Next time you’re introducing yourself or you want to make someone feel at ease with you, do the same. You’ll be amazed at how this changes the conversation. Just be aware of the nonverbal cues.

Mirroring is a great way to build trust and rapport. Most of the time it is done instinctively. In the most intense conversations, mirroring is observed as a sign of agreement with the other person. Have you ever been talking to someone and they yawned and therefore that made you yawn. Evening reading the word “yawn” can make you yawn. Have you ever heard someone say that a certain two people are together so much that they start to look the same or do the same things? When you and someone are “vibing” or “clicking,” it’s almost always followed by intense mirroring. That’s why we say smiles can be contagious. It’s also of note to say that mimicking a certain emotion can also draw you into that feeling. For example, if you’re mad, but you begin to have a smile on your face, slowly, you will start to feel happier. Another example could be if you want to feel dominate, you could walk around with the hands on your hips. Hands on your hips are a sign of feeling dominate or in control.  Next time you’re in a deep conversation with someone, change your position. See if they begin to mimic your movements. This is a sign of mirroring, and also a sign that you and the other person are in sync.